Home World Discover more than 400 years of coral reefs in the Great Barrier... 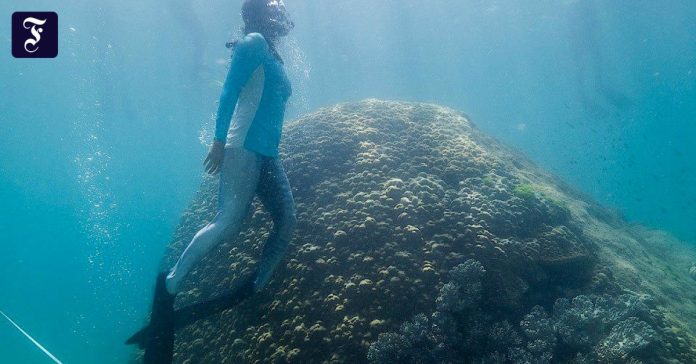 DrThe giant corals of the Australian Barrier Reef existed before the first settlers from Europe reached the Australian coast. It is believed to have survived approximately 100 coral bleachers and as many as 80 hurricanes. In addition, it is more than ten meters in diameter, making it the widest known reef on the world-famous reef system, which stretches for more than 2,000 kilometers off the east coast of Australia. At 5.3 metres, it is also the sixth highest coral ever measured in the Great Barrier Reef. Its highest point extends up to two meters from the surface of the water.

As a research team from James Cook University reports in Scientific Reports, the reef is located in a relatively secluded conservation area in a marine national park near Orpheus Island off the coast of Queensland. Despite its great age, estimated at more than four centuries, and astonishing size, it was only discovered by divers in March of this year. Researcher Adam Smith reports to the Guardian that the giant corals were well known to fishermen in the area. But no one has measured it. Old ropes and three concrete blocks were found at the base of the coral.

After consulting with Aboriginal Australians, the hemisphere-like structure was christened ‘Moga Dambi’. In the language of the Manbara indigenous people who live in the area, this means “large coral reef”. The researchers reported that the surface of “Moga Dambi” is 30 percent dead at the top and covered in these places with sponges and algae. This can be explained by the action of the sun at lower waters or by warm water in the upper layers. No diseases and symptoms of bleaching have been found on coral.

Scientists are concerned about the potential consequences of global warming, coastal development and overfishing on coral reefs. “Moga Dhambe is currently in relatively good health. But climate change, deteriorating water quality and other threats are impacting the Great Barrier Reef. Scientists, indigenous peoples, and others need to monitor this amazing, resilient structure to make sure it lasts for future generations,” the research team wrote in the science blog The Conversation. The researchers also point to the state of the world’s largest coral reef system, which has been affected by several waves of coral bleaching in recent years.

Taking into account average annual growth and changes in water temperatures, they estimate the age of the corals from 421 to 438 years. The oldest known coral on the Great Barrier Reef so far is said to be 436 years old. Since there is no comprehensive cataloging of large and perennial corals, comparisons are only possible to a limited extent. However, in the Pacific Ocean, there are still many coral reefs with a diameter of more than ten meters, including in Samoa, Taiwan and the Japanese island of Okinawa.