Home World Curfew lifted: The weather on the volcanic island of La Palma is... 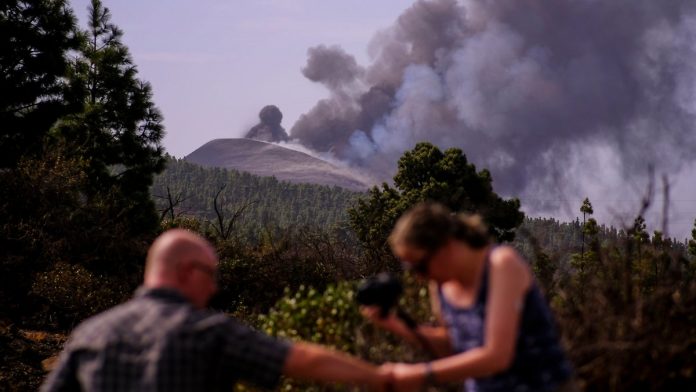 Daily life has become easier for the approximately 3,800 residents of La Palma. They are allowed to leave their homes again. But that’s no reason to sigh. “Here you see a lot of people crying all the time,” says one resident. There is no end in sight to the volcanic eruption.

Nearly two weeks after a volcano erupted on the Canary island of La Palma, about 3,800 residents of directly affected areas are being allowed to leave their homes. Because of the improvement in air quality, several curfews that had been imposed in the past few days in the towns of Los Llanos, Tazacorte and El Paso in southern La Palma have been lifted, state television station RTVE reported, citing the country’s relevant authorities. A Spanish island in the Atlantic Ocean off the west coast of Africa.

On the volcano located in the Cumbre Vieja mountain range, a new chimney was built during the day. However, there is still no evidence that areas previously spared from lava flows are at risk, according to the Canary Islands Volcanic Institute (Involcan). According to official reports, the lava destroyed more than a thousand buildings, and its temperature reached about 1000 degrees. About 6000 residents in several localities were taken to safety. “Here you can see a lot of people crying all the time,” an older man told RTVE.

The area covered in La Palma by a one meter thick layer of black lava, including parts of the cemetery, has now been corrected by the European Copernican Earth Observing System to 367 hectares. On Friday there was talk of 709 hectares. According to the latest official information, more than 3,300 hectares were affected by dark ash rain. This roughly corresponds to the total area of ​​4,500 football fields.

La Palma, less popular with tourists than other Canary Islands such as Tenerife, Gran Canaria, Fuerteventura or Lanzarote, was declared a disaster area on Tuesday. According to estimates by the regional government, the damage already amounts to several hundred million euros. Banana cultivation, which is so important to the island that about half of the population of about 85,000 live directly or indirectly and which was already in crisis before the volcanic eruption, is particularly hard hit.

With the volcano’s first eruption since 1971, the uncharted volcano has been releasing large amounts of rock, lava, smoke and ash almost continuously since September 19. Even experts can’t say how long it will stay active. It may take weeks or months.

About ten injured: an explosion rocks a refugee camp in Lebanon

Guterres: Temperatures rise by 2.7 degrees – humanity is “on a...