Home science COVID-19: When will it be possible to vaccinate children aged 5-11 years... 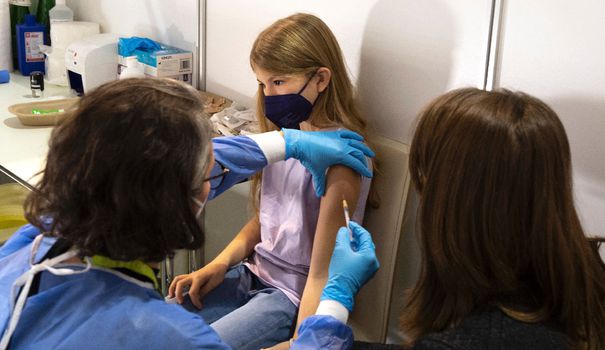 After the US, Israel and most recently Austria, should France extend its Covid-19 vaccination campaign to children aged 5-11? As pollution continues to soar in alarming fashion and we plunge into the fifth wave as Christmas approaches, the question returns in a disturbing fashion. Because even though France has a vaccination coverage rate of 75%, which is one of the highest in the world, there are still nearly 7 million people over the age of 12 who are not immunized. This leaves Sars-Cov-2 with the potential to spread throughout the territory and generate thousands of contaminations.

To limit the spread of the virus, then, should vaccination be extended to 5-11 years? Today, only children with very serious diseases can receive injections. For others, we will have to wait for the opinion of the European Health Agency, expected in December, and then the opinion of the French health authorities. This mandate should be deferred to January 2022. Unless France, like Austria, decides to bypass European opinion. is unlikely. Or is the health situation not deteriorating frankly? less likely.

Few benefits, “extremely rare adverse effects” have not yet been ruled out

But what do we really know about the effect of vaccines on young children? Preliminary results from a clinical trial conducted by Pfizer Of the 4,500 children they show no serious side effects and reveal only minor effects, such as pain at the injection site, some redness, or even fatigue or fever. They assure that this vaccine protects them by 90.7% from the symptomatic forms of Covid-19. Moderna Clinical Experience, which concern 4753 children, report similar results, which are close to those obtained in adults. In addition to protecting against SARS-CoV-2, vaccinating youngsters could make it possible to keep schools open, or even reduce transmission of the epidemic in the general population. But many experts believe that the risk-benefit ratio is not clear.

“We are currently struggling with, not one, but several epidemics — bronchiolitis, measles, chickenpox, etc. — that send dozens of children to intensive care, to the point where some pediatric services are already saturated, but not everyone cares, like every year … and we are told that we must urgently vaccinate children aged 5-11 against Covid-19, a disease that is most often benign for them?” Department at the University Hospital of Nantes. On November 15, the French Pediatric Society, which she chairs, signed a forum With three other Pediatric Scientific Societies plus the French Infectious Pathology Society stating that there is “no urgent need” to vaccinate children aged 5-11 years.

“In the vast majority of cases, younger Covid-19 takes the asymptomatic form or has very few symptoms, such as a cold. Since the beginning of the epidemic, we have detected only about 600 cases of PIMS and all have developed positively. In adults, We have reached more than 100,000 deaths!”, as against three deaths for children, insists Professor Grass Le Guin. Side benefits, nothing obvious, for that. And in such a situation, the imposition of vaccination on children can be justified only if the risks, even if extremely rare, are excluded, as the authors of the forum said. “We are pro vaccines and have no major concerns about potentially serious side effects, the first data on a few thousand children seem to confirm this. But if we want to be absolutely sure of detecting the risks, we have to wait. The results for millions of injections “explain Prof. Grass Lu goin. In adolescents, the increased risk of developing eg myocarditis or pericarditis in real life was calculated to be between 5 and 21 cases per million injected doses.

So why do US authorities, in particular, still choose to vaccinate the youngest? “The American health situation undoubtedly justifies this small risk, but not here,” Professor Grass Le Guen slides. Across the Atlantic, where the population is five times greater than that of France in the same age group, the estimated number of deaths was 94. To have a status equal to France, they should lament only 15. Observed obesity in young adults, as well as severe disparities in their health system. In Austria, this decision can be explained by the very strong wave of the epidemic.

Focus on a third dose for adults

As the Academy of Medicine published, on November 15, Opinion tends to confirm the recommendations of the educated pediatric societies. Academics are still opposed to the massive vaccination commitment to young children. “It would not be ethical to launch such a campaign, when the benefit is slight, because there are still many unvaccinated adults keeping the virus spreading. This will inevitably lead to great parental reluctance and may even discredit the current vaccination campaign,” he warns. Pierre Peggy is a member of the Academy of Medicine.

However, academics are in favor of extending vaccination to children “at risk of developing serious forms of comorbidities, regardless of their age, as well as to other children living in their family and school surroundings”, but also to children living in a retinue of at-risk adults, in particular Immunocompromised and chronically ill persons. They are also concerned about possible future mutations of the virus. “Severe forms in young children are very rare, but there are reasons to remain suspicious, adds Pierre Beige. The delta variant, which is already more contagious and causes more severe forms, has recently mutated with the ‘AY4.2’ sub variant. This must be monitored, and we are noticing an increase In serious cases of children, especially in Eastern Europe, without anyone understanding why.” Another form, B.1.640, is called “Congolese”.It is also of interest to professionals.

In both press releases, the researchers added that because the disease is predominantly benign in children, “the benefits of natural immunity” could be considered. Clearly, a strategy of allowing the virus to circulate in offspring in order to develop natural immunity in the population could be an option. The observations were inevitably a surprise, because even if a vaccination did cause serious side effects, they would – logically always – be rarer and less dangerous than those of the disease. “We hesitated to write this sentence, admits Pierre Bige. This is justified by the fact that we know that the disease is very benign for children.” Christelle Grass Le Guin for her part believes that even if the risks of vaccine side effects are minimal, you should be confident before recommending injections.

However, vaccinating the young will likely reduce the spread of the virus in the general population. “That’s right, but the protection from the vaccine diminishes over time, so herd immunity looks more and more like an elusive trophy,” answers Christelle Grasse Le Guin. In addition, children are already considered low pollutants compared to adolescents and adults. Asking to vaccinate children To allow adults who do not want to be vaccinated to walk around without a mask, and this bothers me, we should instead highlight them. “Other priorities appear more urgent according to pediatricians, such as the administration of the third dose to vulnerable persons or those over 65 years of age, then, no doubt, to the entire population. It remains to be seen whether this situation will remain viable in a few weeks, in While the number of new daily cases of Covid-19 already exceeds 20,000.

Covid: France advised against travel to Shanghai, US forces its employees...