Home science Covid-19: Three questions about the variable in the origin of the mass... 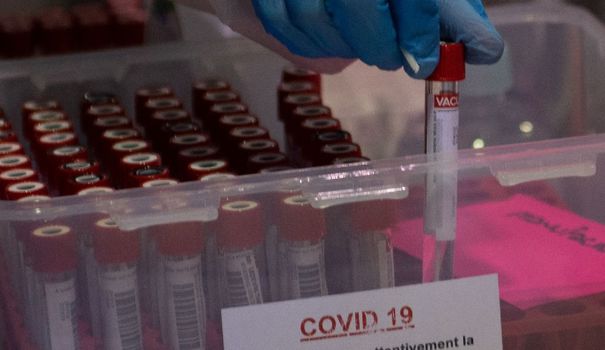 Its appearance on French soil dates back to the beginning of October in Brittany. Since then, the B.1.640 variant has been officially discovered ten times. Enough to get on the health authorities’ radar. The SARS-CoV-2 mutation, first identified in Congo, has been added to a single list currently being evaluated by Public Health France and the National Reference Center (CNR) for respiratory infection viruses. Three questions about this variant and its danger, at a time when the delta variant was once again penetrating in France.

“The B.1.640 variant has been detected 11 times in France, including 8 cases confirmed sequentially as part of an investigation in a cohort in Brittany; the index case for this cohort has a history of travel to the Republic of the Congo,” CNR notes in its latest risk analysis. Posted this weekend. It could also have been detected sporadically in Provence-Alpes-Côte d’Azur as well as in Ile-de-France, without confirming this information so far.

Internationally, B.1.640 made its debut in Congo, in September. The first case that appeared in Brittany could have been imported by a person returning from this country on the African continent. Sequences carrying this variant were also once observed in Italy, the Netherlands, Switzerland, and the United Kingdom, as well as in the United States.

The CNR in B.1.640 noted an ‘unusual’ profile of mutations – nine in all – affecting the S protein (Spike), which allows the virus to enter our cells. The most famous of them, the N501Y, found in the Alpha, Beta and Gamma variants, makes the variant more portable.

Another deletion, 137-145, “can lead to reduced neutralization by neutralizing antibodies after infection or post-vaccine.” In short, B.1.640 would be able to alter the efficacy of injected sera to date, or reduce natural acquired immunity after infection.

The CNR remains confident: this mutation has already been observed in variants such as Alpha and Eta, without “any significant vaccine escape” observed. The reference center concludes that its “effect remains to be evaluated,” which also mentions the presence of the P681H mutations – which lead to increased infection – in addition to T859N.

Public Health France and CNR reassure: “The epidemiological data indicate that there is no significant spread or progress in France or internationally. There are no convincing viral, epidemiological or clinical elements in favor of a significant public health impact,” they point out. “The presence of co-mutations with one or more VOCs/VOI variants (VOC: variants of concern/VOI: variants to follow, NDLR) should nonetheless be monitored.”

Scientists remain alert. “We wonder how a variant could emerge in so many countries. Is this simply because travelers are on the move or because it has certain characteristics?” asks Etienne Simon Laurier, who is responsible for the evolutionary genomics unit of RNA viruses at the institute. Pasteur, in columns Parisian. In the Congo, the sequences of this mutation are more numerous than those associated with the delta variant, and the majority are worldwide.

Health Minister Olivier Veran asserts that this discovery represents “our ability to track changes”. Fortunately, “Nothing indicates that [B.1.640] particularly dangerous” West of France This Tuesday.

Cécile Mizunov is a Senior Fellow at Institut Montaigne and a consultant to the IFRI Center for Energy and Climate.