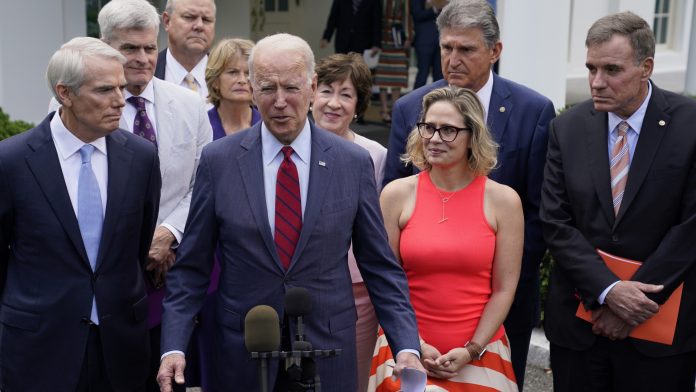 For months, parties in the US Senate have been grappling over a multibillion-dollar infrastructure package — and now President Biden is allowed to announce a deal. But that may not be enough for House Democrats.

A group of five senators from both Democrats and Republicans recently submitted a compromise proposal in a month-long dispute over massive infrastructure investments. It provides for $1.2 trillion to be spent on roads and bridges, as well as broadband, electronic car charging points and the power grid. Biden later said the deal was a big step in competing with China. Senate Majority Leader Schumer, who was not involved in the negotiations, signaled general approval.

According to the Office of the President, $579 billion is planned to be spent as part of the total. The package must be funded, among other things, by oil sales from strategic US reserves and auctions of 5G frequencies.

Republican Senator Rob Portman said no new taxes were foreseen in the agreement. Biden specifically ruled out an increase in the gasoline tax, which has remained unchanged in the United States at the federal level since the 1990s. More details should be revealed later in the day.

Biden had originally targeted $2.3 trillion for his infrastructure package. However, Democrats only have a small majority in Congress. By comparison, both parties agree that bridges and roads in the United States, some of which are diseased, must be modernized. Accordingly, agreement on a package for “physical infrastructure” appeared recently.

The package, which has been calculated over five or eight years, according to Government House, will spend $973 billion and $1.2 trillion, respectively. Exactly how these long-term calculations are made was initially open to debate.

Biden: Agreement is a “compromise”

In any case, the last word on this topic is far from being said. Biden acknowledged that there is a lot of work to be done to turn the plans into a reality. He said he had no guarantee that Congress would get enough votes to agree. Biden, who has served in the Senate for more than 35 years, has emphasized that he knows the processes in Congress only well. He trusts the Republican senators who participated in this agreement. And he trusts his party’s common sense to support a package with good items, even if it doesn’t contain all the cherished concerns.

Biden emphasized that neither side had all his wishes. It is a compromise. The fact that many of his proposals are not included in the current agreement does not mean that he will not continue to fight for them.

However, it was not initially clear whether the second House of Representatives, the House of Representatives, would approve the agreement. Democratic Majority Leader Nancy Pelosi recently stated that the smaller version of the package would not find a sufficient majority. Nor did it participate in the recent negotiations. There is no compulsory faction in the United States.