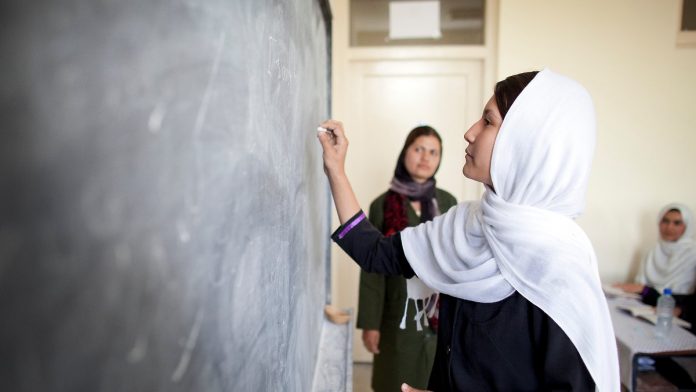 The transitional government is complete

Last week, the Taliban ordered students and teachers to return to class. They say girls should follow “ASAP”. In addition, the Islamists are supplementing their provisional government by appointing an additional 17 people.

About five weeks after taking power in Afghanistan, the Taliban introduced the missing members of its transitional government – but the women still aren’t among them. Taliban spokesman Sabiullah Mujahid told a news conference in Kabul that another 17 people had been appointed to the government by decree. One of the representatives in the Ministry of Health belongs to the Hazara minority. In the selection, special attention was paid to professional suitability.

The hardline Islamists had already brought about 30 members into the government two weeks ago, including not a single woman or anyone from any other political grouping. Western countries have called for a so-called inclusive government to which the Taliban does not belong only. The entire European Union has made this a condition of further commitment, for example to pay development aid.

Mujahid called for recognition of the Taliban government. It is the duty of the international community and countries of the region to establish diplomatic relations with the new Afghan leadership. He hoped that this would happen in the near future.

At the same time, the Mujahid announced the reopening of girls’ schools. “It will be done as soon as possible,” he said. Last week, the Taliban ordered teachers and students to return to secondary schools. Teachers and students are not mentioned. In addition, the Islamists replaced the former Ministry of Women in the Afghan government with the “Ministry of Virtues”. This agency was responsible for the flogging of women during the first Taliban rule in the late 1990s.

Taliban rule between 1996 and 2001 was particularly marked by the oppression of women. They had to wear a burqa in public, they were not allowed to work, and girls were not allowed to go to school. Since the Islamists have returned to power, many women fear that they will reintroduce similar rules to themselves.

Police in France use tear gas against train customers