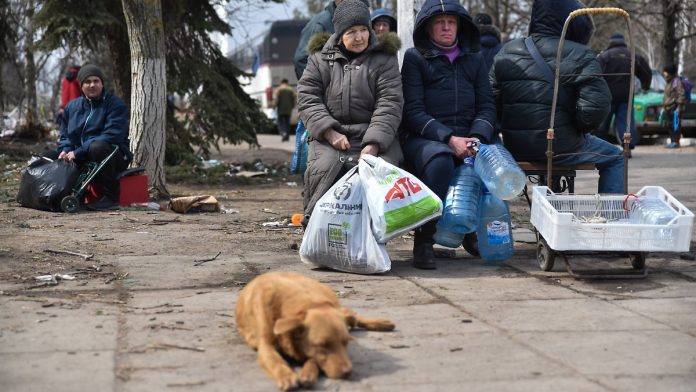 Evacuation in bus convoys
Russia announces a ceasefire in Mariupol

About 160,000 civilians remained in Mariupol while Russian forces leveled their city. All supplies have been cut off for weeks. Russia is now declaring a ceasefire as of Thursday morning to allow them to escape.

The Russian Defense Ministry announced a ceasefire in the southern Ukrainian port of Mariupol. The ministry said on Wednesday evening that the measure will come into effect at 10:00 am (09:00 am CET) and will create an opportunity to get civilians out of the besieged city through a humanitarian corridor.

“In order for this humanitarian operation to succeed, we propose the direct participation of representatives of the United Nations High Commissioner for Refugees and the International Committee of the Red Cross,” the statement said. The Ukrainian army must also ensure the security of bus convoys on which civilians will be transported.

The humanitarian corridor is said to lead to Zaporizhia through the Russian-controlled city of Berdyansk. The Interfax news agency quoted Major-General Mikhail Mizintsev as saying that the Ukrainian side has until six in the morning Thursday (5:00 AM CET) to declare a ceasefire.

Ukraine and Russia have repeatedly accused each other of sabotaging the residents’ escape from Mariupol. Recently, French President Emmanuel Macron also insisted on a humanitarian aid campaign for the city surrounded by Russian forces in a phone call with Kremlin President Vladimir Putin. It’s been Mariupol for weeks Cut off all supplies It was subjected to intense bombardment by Russian forces. The city is now largely destroyed, but about 160,000 residents are said to be stuck there. The situation on the ground is catastrophic. According to Ukrainian sources, at least 5,000 people were killed.