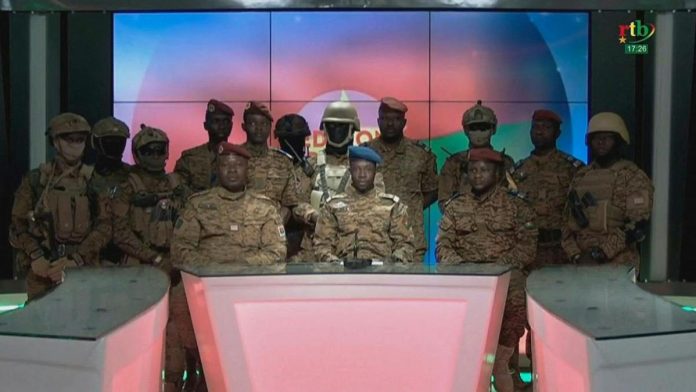 Soldiers declaring their seizure of power in Burkina Faso on TV

Rebel soldiers have ousted President Roch Marc Kabore and seized power in the crisis-ridden West African state of Burkina Faso. This was announced by the spokesman for the putschists on state television.

IIn Burkina Faso, the army says it has ousted President Roch Kabore and the government. A military spokesman said in a televised statement on Monday that Kabore is unable to unite the country in the face of current challenges.

The government and parliament were dissolved, border crossings closed, and the constitution suspended. They were arrested and taken to a safe place. The statement was signed by Officer Paul Henry Sanogo Damiba.

Heavy fighting broke out near Kabore’s home in the capital, Ouagadougou, on Sunday. It was also said that the shooting took place in the barracks. The rebel soldiers are said to have demanded more support in their fight against ISIS extremists.

Initially, the whereabouts of President Kabore remained unclear. On Monday, the president’s Twitter account appealed to soldiers to lay down their arms to protect democracy and the country’s interests. However, Reuters was unable to verify whether the short message was in fact from the president, who has not appeared in public since Sunday’s shooting.

Despite its gold deposits, Burkina Faso is one of the poorest countries in West Africa. Extremists linked to Al Qaeda and the Islamic State group ISIS often carry out attacks in the country, and the victims are mostly civilians and soldiers. This has contributed to growing resentment among the population in recent months.