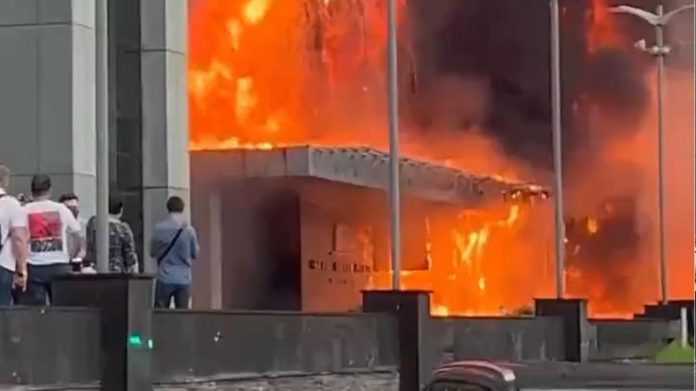 Black clouds of smoke billowing over Moscow: a large fire broke out in a commercial building in the Russian capital. Rescue workers fear dire consequences.

A large fire broke out in a large commercial building in the Russian capital, Moscow, on Friday morning. Rescue workers fear there may still be people in the Grand Setun Plaza.

According to the Russian Ministry of Emergency Situations on the Telegram news service, 130 people have been rescued from the building so far. At least two people were reportedly injured. 340 firefighters with a number of fire engines and three helicopters were deployed to put out the fire.

The Ministry of Disaster Management said on the Telegram online service that the search for other people may still be in the building is continuing. According to the ministry, the fire spread over an area of ​​1,000 square metres.

According to its website, the office building has ten floors and a total area of ​​70,000 square meters. It houses offices and many commercial spaces available for rent. The Russian pension fund will also have a seat in the building.

The cause of the fire is still unclear

It added that the Russian Minister of Disaster Prevention, Alexander Korenkov, was on his way to the site of the fire. The cause of the fire is still unclear. Russian media speculated about a short circuit.

Speculation about the potential insurance fraud also quickly surfaced on Twitter. After many European companies pulled out of Russia, many office and retail space became empty.

See also  Eastern Europe was particularly affected: the epidemic stole much of life | life and knowledge