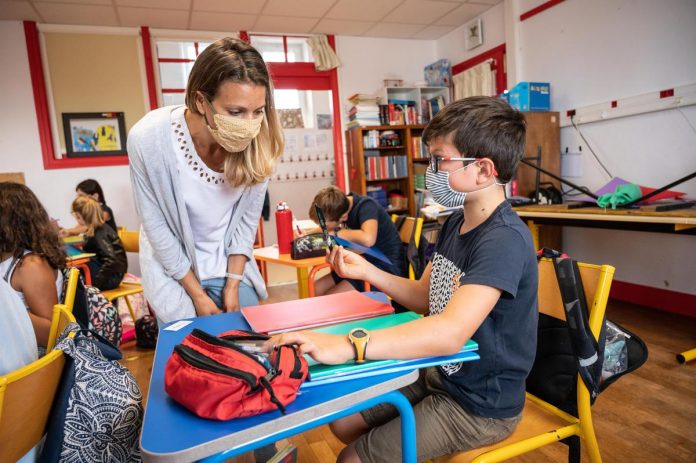 Students from CP to CM2 wear the mask from Monday. A government decision justified by the re-emergence of the epidemic. In the region, Cruz, Correz, Lot-et-Garonne and Pyrenees Atlantic are concerned

Students from CP to CM2 put the mask on from Monday 8 November in 39 departments where they removed it, a government decision justified by the escalation of the Covid-19 epidemic, but which could cause disappointment.

And government spokesman, Gabriel Attal, announced that the return of the mask with the return of the Halloween holiday targets “the sections where the infection rate has unfortunately stabilized above 50 per 100,000 residents.”

In these sections, the procedure was newly received. “The kids only took it off for two weeks and it did them so much good, I set them up. Suddenly, we necessarily became a little anxious,” testifies Marie Gillardot, who teaches at a school in Vienne.

“It’s the whole protocol that has been improved, and it also means returning the perimeters to separate classes on the playground, and practicing strict no-mixing among students again,” continues this teacher, SE-Unsa member.

The government said that in the event of a re-wearing of the mask, other measures (restriction of mixing, conditions for organizing sports lessons, etc.) would not come into effect until the following Monday.

But unions, managers and teachers expect a lack of understanding from some families. “Students are going to be a little disappointed. I actually asked my classmates to start Monday with a simple explanation of why the mask should be re-wearing,” explains Laurent Tint, principal of an elementary school with 14 classrooms in the suburbs of Pau, in the Pyrenees-Atlantic.

“But at the parental level, we risk having small conflicts to sort out,” this manager continues. For Jesselyn David, general secretary of Snuipp-FSU, the first elementary school federation, “These back-and-forth movements risk creating instability and insecurity in schools.”

From now on, it must be worn on Mondays in 57 metropolitan departments and four overseas territories (Reunion, Guadeloupe, Martinique, Guyana).