Home science At the IHU of Didier Raoult, the Covid-19 group, many questions …... 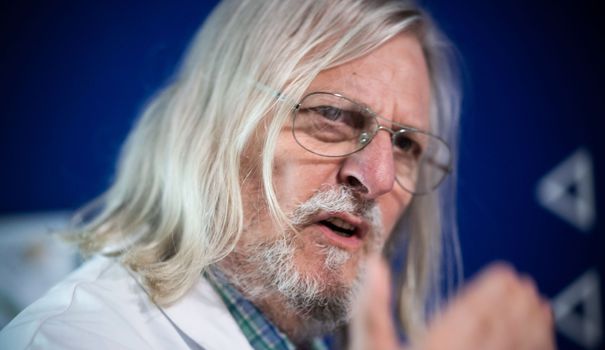 Dozens of people were infected between mid-March and early April inside the IHU Méditerranée Infection Marseille by Covid-19. A technician was placed in intensive care – and fortunately survived – and a hospital medical practitioner was taken to the hospital. The issue has been kept secret internally, to the point that bi-weekly seminars and meetings, during which mask-wearing and social distancing are not respected, have been maintained.

Afraid of this disdainful behavior of the basic rules of health and particularly enraged by the anti-science rhetoric which has been for several months by Professor Raoult and his relatives, and many people who work at the IHU, at Timone Hospital (AP-HM) or in direct contact with these institutions, They decided to testify for L’Express. They are all angry with the negativity of the University of Marseille Hospitals (AP-HM) towards the director of the IHU, but also at the climate of fear prevailing in the IHU and AP-HM. These assorted witnesses, whose identity L’Express has been able to confirm, have also been careful to speak anonymously to avoid reprisals which they consider certain.

“The technician, who was in a serious condition, was taking hydroxychloroquine-azithromycin”

“There have been at least six cases of contamination within our facility, including a technician who was placed in intensive care at Timon Hospital – which is across from us – and a hospital (PH) practitioner in infectious diseases who was hospitalized at IHU,” Recognizes a person who works at the Professor Raoult Institute. Two Timone members confirm these observations. “The technician, who was in a serious condition, was received in intensive care at the end of March, indicating that the date of contamination is around 20. Then he was taking hydroxychloroquine-azithromycin, but this treatment was stopped immediately when he was not intubated, But he received high-flow oxygen. Fortunately, he did,” one of them said. These two witnesses also confirm that a hospital practitioner close to Didier Raoult was hospitalized at the end of March at the IHU, where he was also treated with a combination of hydroxychloroquine and azithromycin. His condition was worrying enough to receive a visit from doctors from Timone, who put him under Optiflow, a device that delivers high-flow oxygen. “He was close to resuscitation,” they say. His hospitalization continued through the end of April.

Four other people, including two secretaries, two doctors and two technicians, have been tested for the virus, but without developing serious forms of Covid-19. ‘Everyone worked on the fourth floor, where there is an open space for doctors and technicians and a secretariat communicating with Professor Raoult’s office. This situation does not surprise me, as there is little, or even no window in the open spaces, but most of Didier Raoult’s relatives do not wear a mask. Explains an IHU employee. Was Didier Raoult also injured? If it is impossible for them to provide concrete evidence, two people from the IHU claim to have a range of clues. “A communication case was announced before his departure for Senegal, which did not prevent him from leaving [du 26 au 31 mars, NDLR]. He did an X test and when he came back, when there were already six positive cases upstairs, someone brought in a positive X test. We are convinced that it was his, but he denied it, and because he is a test under X, there is no way to find him.” Contacted by Express, Yannis Roussel, liaison with the IHU Méditerranée Infection, declined to respond to the accusations. A close advisor to Didier Raoult estimates that “it is not We have reason to respond to you,” who on the other hand does not hesitate to threaten to complain “if you spread false information.”

Worst of all, Didier Raoult continued to organize and attend ‘staff meetings’, which are held every Tuesday between noon and two, and seminars open to foreigners, organized at the same time every Friday, in the amphitheater of the IHU, where gestures of barrier were few or no respect. All this while the group is progressing,” continues an IHU employee. On April 16, Professor Raoult, for example, invited some of his fans as well as Professor Toussaint to a conference on the epidemiology of Covid-19, in which half of the participants did not wear a mask and were less than two meters tall, as reported by L’Express. These habits have not changed since then, as evidenced by new videos and photos of a symposium organized on May 21 where neither Professor Raoult nor his guest wasAnd the Jean-Dominique Michel, the professed expert – a strong proponent of hydroxychloroquine –And the You didn’t wear any mask.

Not respecting health standards usually “to please” the teacher?

There is nothing exceptional about a lump occurring within a hospital. On the other hand, the preservation of the treatment protocol that has been denounced by the vast majority of the scientific community is even more surprising. “Today, if you came to the IHU for Covid-19, you would still be given hydroxychloroquine with azithromycin and zinc, and an internal source attested. And the doctors who do not prescribe it are few because they fear that the IHU’s internal program – which allows the administration to follow prescriptions – will betray it. … and those who do not really want to describe, write false statements in this program, in order to obtain peace. ” Didier Raoult continues to promote his protocol As well as in public places This in particular, as explained in a March 10, 2021 email obtained by Express. When a surgeon was asked about his interest in a patient with a chronic infection with Coxiella burnetti – a bacterium – being treated particularly long-term with hydroxychloroquine (Plaquenil), which is immune to Covid-19, the Marseille professor replied: “The question of a Covid-19 vaccine is off the table,” Because the patient is already taking hydroxychloroquine, which is “perhaps largely enough” to protect him from Covid-19.

More problematic is the lack of compliance with the wearing of the mask in open spaces as well as the holding of conferences and seminars when the group was known to the management. Indeed, the hypothesis that other employees became infected and developed asymptomatic forms after clustering, cannot be ruled out in April. However, the employer is responsible for the health and safety of its employees (Article L4121-1, 2 of the Labor Code) which means, in particular, during the epidemic period, the obligation to wear a mask in the workplace. Why, then, were meetings and seminars kept without a mask, even if it meant risking the health of others? Here again, Yannis Russell refuses to answer.

“There is an entire section of the IHU operating in a vacuum, with a leader who never contradicts and exercises real influence, and who does not hesitate to crush and despise those who are not.” Well, says a staff member from IHU. He is undoubtedly smart and attractive, but you have to see the mental strength he puts on the staff and especially in his inner circle. Which he’s been doing for years. If he says that the virus is transmitted mainly through the hands and that he is not wearing a mask, everyone will believe him and imitate him, for fear of offending him or wanting to please him; If he is suspicious of vaccination, some refuse to vaccinate, even make comments against the axe, or are vaccinated secretly.” However, this grip could have been loosened after the Covid-19 group. “That is the only benefit of this story,” whispered to IHU Some fifteen close collaborators with Didier Raoult had taken advantage of his absence in Senegal to be vaccinated.

“Everyone knows what’s going on at IHU, but AP-HM does nothing”

This harmful atmosphere has already been reported on both human and professional levels duringpress investigations or internal audits. But the cluster ring seems to have been the last straw. “I was shocked by what’s going on in the foreground, notes a doctor from Timone. At first, his wobbly studies on hydroxychloroquine can make you smile, but here we see dangerous behavior…and PA-HM [qui salarie une partie du personnel de l’IHU, NDLR] He does absolutely nothing against this position while the entire credibility of the institution is called into question: it is unbelievable. Internally, AP-HM’s inaction is also exasperating: ‘Everyone knows what’s going on. It happens in IHU: people who crack, go on sick leave, go to occupational medicine, but AP-HM does nothing, while we are all employees and prisoners in this situation … It’s all just a matter of money in my opinion. Referring to the fact that the IHU brings in more than 10 million euros annually to AP-HM thanks to the establishment of a system that allows Didier Raoult and his relatives to publish studies on a large scale in scientific journals run by relatives.

Didier Raoult was also able to count on many supporters, both from the population and among politicians, Renault Muselier by Christian Estrosi and Philip de Villierswayfarer Nicolas Sarkozy Even Emmanuel Macron, who came to visit him on April 9, 2020 in Marseille, before disassociating himself a few months later. “I am under tremendous political pressure to make access to hydroxychloroquine for everyone, but I am resisting,” Jean-François Delfraisse, president of the Scientific Council, wrote to his US counterpart, Anthony Fauci, in Mina Sent on March 25. , 2020, Buzzfeed Reports. Many have tirelessly defended him for more than a year, even as his predictions and analyzes turned out to be wrong one by one, even as he sowed discord in the scientific world by accusing his opponents of being “corrupt,” and still today, when he lodged a complaint of harassment against Elizabeth Beck, a specialist in Scientific integrity, who had the misfortune to ask him questions and details regarding about sixty errors or anomalies in the IHU studies. till when ?

Mad cow disease due to Covid vaccine? Shock Certificate from the TPMP Guest