Home World All fuel! The first Bundeswehr machine over Kabul must be turned... 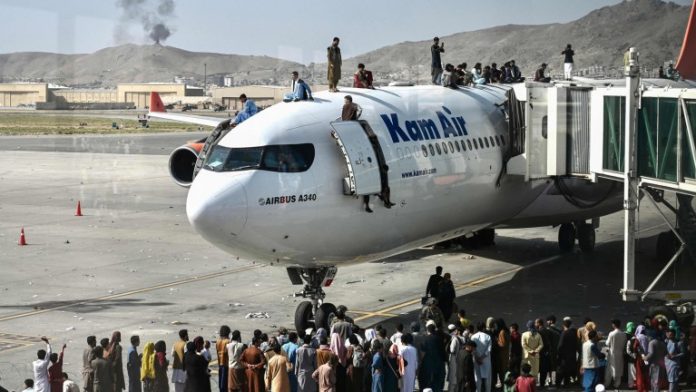 Exceptional situation in Afghanistan! Thousands wait at Kabul airport, hoping to be rescued from the Taliban.

Thousands wait at Kabul airport, hoping to be rescued from the Taliban. The German army is on its way with a total of four planes, meanwhile two A-400Ms have arrived via Kabul – but they are not allowed to land!

Simply put, there are too many people on the tarmac, and a safe landing is not possible. For the machines of the German army, this means: the waiting ring – circles sweep over the Kabul.

And because the tank is now empty from the first machine, it means: turn off, towards Uzbekistan. There will be refueling again.

The problem is: only when American soldiers clear the runway and give the German machine permission to land, can the rescue plane land. That’s why the US military, under pressure, is trying to evacuate the runway – with little success so far.

The first evacuation flight began at 6.30 am from the air base in Wunstorf, Lower Saxony. The second A400M followed at about 9:30 AM, half an hour later, at about 10 AM, the third and then the fourth machine came.

This is perhaps the largest evacuation mission the Bundeswehr has undertaken to date – and one of the most dangerous. Defense Minister Annegret Kramp-Karrenbauer (CDU) explained Sunday evening.

Because: Soldiers don’t know what to expect in the Afghan capital.

How much time is left for the Bundeswehr to evacuate? Not completely clear!

The German Foreign Ministry does not want to make predictions about this. A ministry spokesman in Berlin said the situation was very confusing.

How does the Bundeswehr mission work?

After landing in Kabul, Bundeswehr paratroopers are supposed to bring German citizens and local auxiliaries to safety. In the Uzbek capital Tashkent, a second team will organize a center to save people from Islamists.

The numbers can still be changed, but at least 57 embassy staff and another 88 Germans will have to be relocated. In addition, a large number of local Afghan workers are at risk.

Recently, 1,100 Afghans were still working for Germany in government development aid alone. There are also thousands of former local members of the armed forces or federal ministries.

Evacuation is primarily a logistical task: the people on the list must be collected at a certain time and identified – if necessary, even in a hostile environment with roads that are no longer barrier-free.