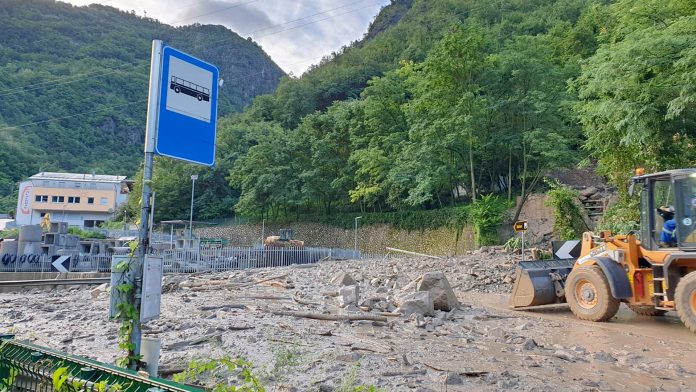 In South Tyrol, many roads were closed due to landslides after heavy rain. Several rivers burst their banks. There were also problems with mud and water in Lombardy, including Lake Como.

Several regions in northern Italy are struggling with floods. In South Tyrol, rivers overflowed their banks after heavy rains. Roads had to be closed due to landslides, including Brenner State Road.

In Clausen, the civil defense warned of flooding during the night because the Isak River overflowed its banks. The fire department said residents should drive from underground garages and make preparations. The situation calmed down again during the day. Brixen was also affected by the floods.

According to the Civil Protection, the fire brigade has been deployed across the country with about 1,000 men and women. The second highest of the four warning levels was applied.

The Mühlwalder Bach River near Lappach overflowed its banks after heavy rain.

On Lake Garda, lumps of mud have penetrated into a hotel in Limone sul Garda. A hotel employee told the German news agency (dpa) that only dining rooms were affected, and guests could stay in their rooms. ANSA news agency reported that 100 guests were brought to safety during the night. There were no injuries.

The streets of Como were flooded

There were also problems with mud and water in Lombardy, including Lake Como. Sometimes, the lake overflowed its banks and washed up the streets in Como. The camp site in Dervio Village had to be evacuated. Around Milan, firefighters warned of the flooding of the Seveso River.

In southern Italy, on the other hand, firefighters continued to fight dangerous fires. In Sicily and Calabria, among others, they worked with firefighting aircraft.

Pope Francis in a hospital for intestinal surgery – Politics