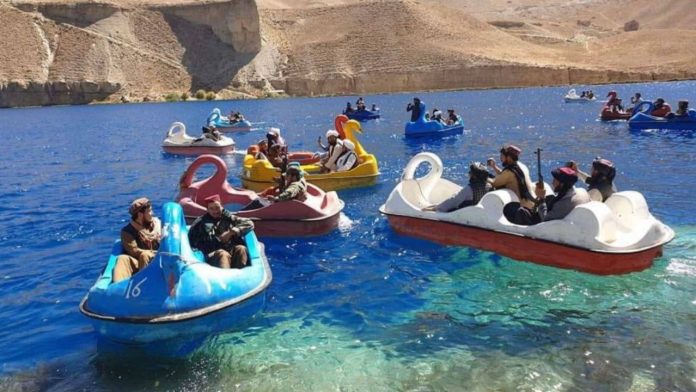 As their murderous fighters kill and torture or imprison residents in other parts of the country, selected people are recovering TalibanTerrorists in an Afghan National Park. It is strange pictures that have now appeared on social networks.

British journalist Jake Hanrahan posted the material on Twitter over the weekend and wrote: “Taliban in Bamiyan province. These photos are real.”

Surreal: The images show the fighters on several swan-shaped pedal boats. Where you take a cruise through one of the lakes of the former tourist area. But even in their “free time” the new rulers of Afghanistan do not want to lay down their arms.

One photo shows at least two fighters with Kalashnikovs, and another photo shows a rocket launcher in the air.

The contrasts are hardly greater: on the one hand, the Islamists behave like little children on vacation on the clear lake in Bamiyan. On the other hand, the terrorists are coldly showing the true face of the new regime.

Around the same time, Islamists flogged a man in the capital, Kabul, after attaching him to a metal device – video clip shows the man screaming in pain, collapsed. The man’s crime: He allegedly stole a cell phone, according to journalist Slimane Hakimi.

The Taliban have previously repeatedly declared that they will judge Sharia according to their interpretation of Islamic law. This provides for very harsh physical punishments such as flogging, as well as amputation and stoning.

As a rule, such punishments are carried out in public to further humiliate the victim and to entertain and deter the public: because the punishments are not primarily a perverted form of “crime fighting”, but are intended to deter the population from opposing the Islamists – the regime of the revolution.

Another action to expect: At the end of the week, the Taliban abolished the Ministry of Women’s Affairs. Before that, women almost completely disappeared from public life.

The Ministry of Women’s Affairs said they were sent home for weeks. The gate to the ministry building was finally closed on Thursday.

The Ministry of Women has been transformed into the Ministry of Prayer, Guidance, Enjoining Good and Forbidding Evil. This so-called “Ministry of Virtue” was responsible for carrying out the most heinous punishments during the first Taliban rule (1996-2001).